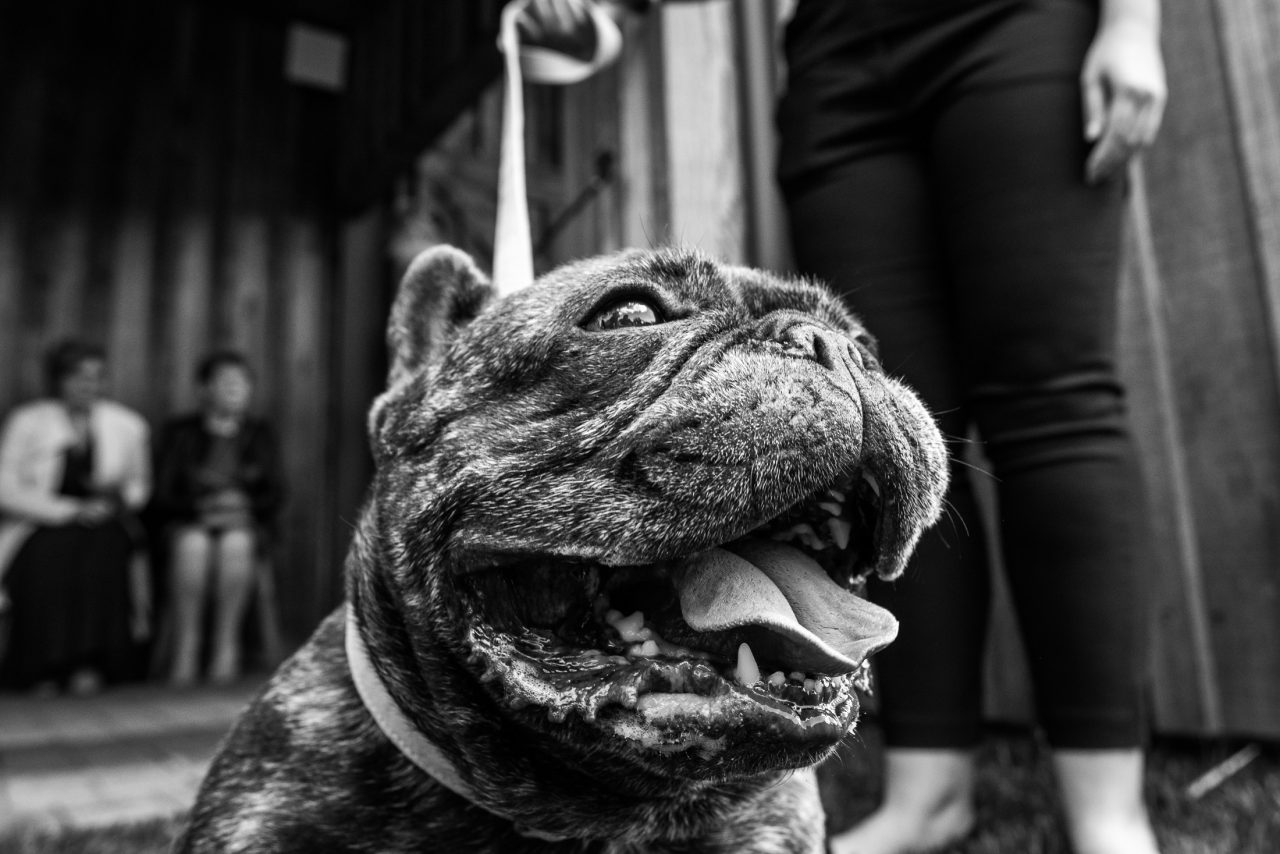 Back in March, we were part of a very special day that, much to everyone’s surprise, nearly had fatal consequences.

Catherine & Daniel were celebrating their Wedding at Bendooley Estate in Berrima on Thursday, March 25th. After two postponements due to Covid, these two would finally be sharing their day alongside their family and friends, as well as their two beloved Frenchies, Beau & Luna.

The day was a normal late-March day – sunny, but not overly hot or cold. Comfortable weather for us, the bride and groom, and all the guests in attendance. Which is why it was so hard for us to predict what would have happened next…

Beau & Luna travelled down to Berrima from Campbelltown without a hitch. Upon arrival, they both enjoyed some water before mingling with guests briefly prior to the Ceremony commencing. Both dogs panted eagerly as they wandered the grounds, which is pretty standard behaviour for dogs attending a Wedding who might be a little over-stimulated and/or anxious.

Mere moments before the Ceremony was about to take place, Beau, just 5 years old at the time and already post-surgery to open up his airways, was panting more than before. He’d taken the few minutes we’d spent debriefing with Catherine and her bridesmaids before the Ceremony to rest in the shade of the garden, but by the time the music was ready to commence and it was his turn to walk down the aisle, he wouldn’t budge.

Catherine sensed his strange behaviour immediately, and told me “He won’t walk”. Not wanting to dampen the big moment that Catherine & Daniel had waited so, so long for (not to mention spent a lot of money on!), I offered to carry him down the isle instead. As soon as I scooped Beau up into my arms, his laboured breathing became far more noticeable. Even just laying in my arms was a struggle.

“He’s overheating”, Catherine said, her worry now far more present than before. “Take him inside on the floor, cover him with wet towels, and cool him down as quickly as possible”.

We didn’t waste any time.

Even though throughout the whole process, my head was absolutely spinning. How had this all happened so quickly? Where were the warning signs? The weather wasn’t even what you’d consider hot by Australian standards, and Beau had been kept out of direct sunlight whilst doing little physical activity since we’d arrived…?

Eventually, after spending the entire 45-minute Ceremony with Beau on cool tiles, covered in wet towels and his breathing being monitored by us, everything seemed perfectly normal again?!

We joined Catherine, Daniel, and their Bridal Party once again for photos before agreeing the dogs were probably buggered after the ordeal (particularly Beau!) and it was best to head home.

Our journey home was an hour and featured very little noise from Beau & Luna in the back of the van. This is standard, as our dogs are usually pooped beyond belief after such a big trip.

When we returned home to Catherine & Daniel’s home, the moment we opened the back van doors we realised things had become so much worse.

The big, pink smile you’d recognise on any Frenchie was suddenly purple on Beau. His breaths were shallow and almost non-existent and his eyes were wide and stressed. We slammed the doors closed and raced to the nearest Vet. Thankfully, being late on a Thursday afternoon, Ingleburn Emergency Vet was only 10 minutes away. Those 10 minutes felt excruciating as we drove in fear that he wouldn’t survive the trip.

When we arrived at the vet, I all but threw him into the arms of the stunned Vet nurse at the front counter, who immediately took him out the back.

What followed was hours of nail-biting and playing middle man between worried Vet staff and an even more worried Bride & Groom while we waited to hear if Beau would make it. Eventually, the decision was made to transport him to ARH in Sydney where he could be monitored by a specialist and get the care he needed, but even still his chances of survival were slim. Vets worried that the damage suffered by his lungs would be irreparable and he’d never be able to breathe unassisted again.

The Vet told us that had we have waited 2 extra minutes, it’s extremely unlikely that Beau would have survived. Despite the long and exhausting day I’d had, I struggled to sleep that night fearing Beau’s fate, and thinking the whole afternoon over and over again in my head. What if we’d stopped for fuel, and he hadn’t made it? What more could I have done to prevent it?

The next day, we found out Beau was set to make a full (albeit very expensive) recovery. His breathing had returned to normal, and thankfully there were no traces of irreparable damage from the incident meaning he could go on to live a happy and full life.

I couldn’t shake the guilt that I wasn’t able to spot the signs in Beau as quickly as Catherine had that day. Aren’t I supposed to be the pet expert? The one who works with them everyday?

I knew I never wanted myself or any of my team to make the same mistake or go through the same ordeal that I had, so I enrolled us in a Pet First Aid Course so we all could recognise the signs of heat stroke, among other illnesses and injuries that we’re no doubt yet to encounter in our work.

I know we are nowhere near trained and qualified Vets, but I feel far more peace of mind knowing we’ll be more prepared for next time – whenever or whatever that may be.

Particularly for something as ‘silent’ and ‘dangerous’ as heat stroke – even on a day when you’d least expect it, like we did that day.

That’s why I’d like to share with you some of the most easy to spot yet vital signs of heat stroke in dogs, because they may just help to save your dog’s life like they did for Beau…

Heat stroke is characterized by a dangerous rise in core body temperature beyond the normal range (37.9°C to 39.2°C) and can result in thermal damage to tissues and organs. It can take as little as 10-15 minutes for a dog to succumb to heat stroke and mortality rates verge on 50% with most deaths occurring within the first 24 hours. All dogs are at risk but those who are overweight, dark or dense coated, elderly or sick are especially vulnerable.

Common signs and symptoms to look out for…

If you suspect your dog may have heat stroke…

Immediately remove them from the heat and implement these cooling techniques;

Studies have shown better survival rates in dogs which are cooled down prior to arrival at the vet hospital as compared with dogs who were not.

Tips to preventing heat stroke in your dog…

Despite all the dramas that unfolded, Catherine & Daniel still managed to wear a smile and share their day joyfully with their nearest and dearest. Check out some of the beautiful photos featuring Beau & Luna below: 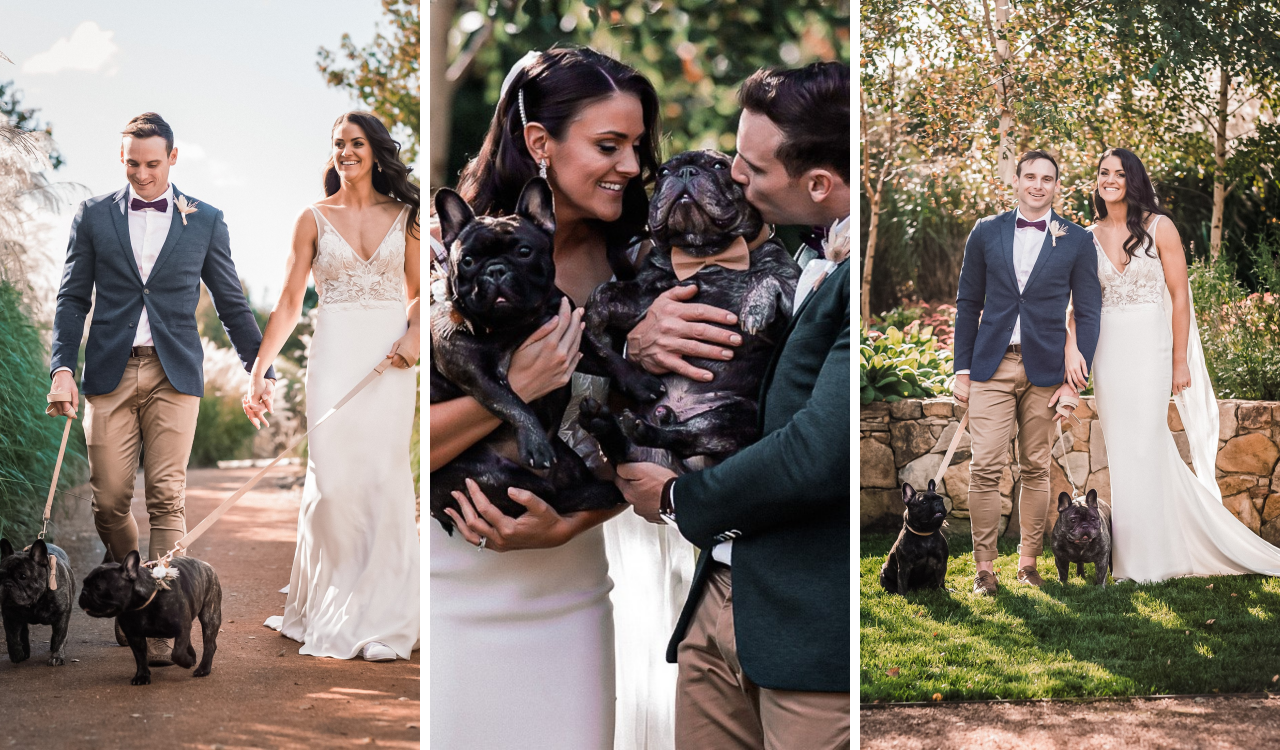 previous
Wedding Feature: Jade & Alex
next
How Do I Know If My Cat Likes Me?